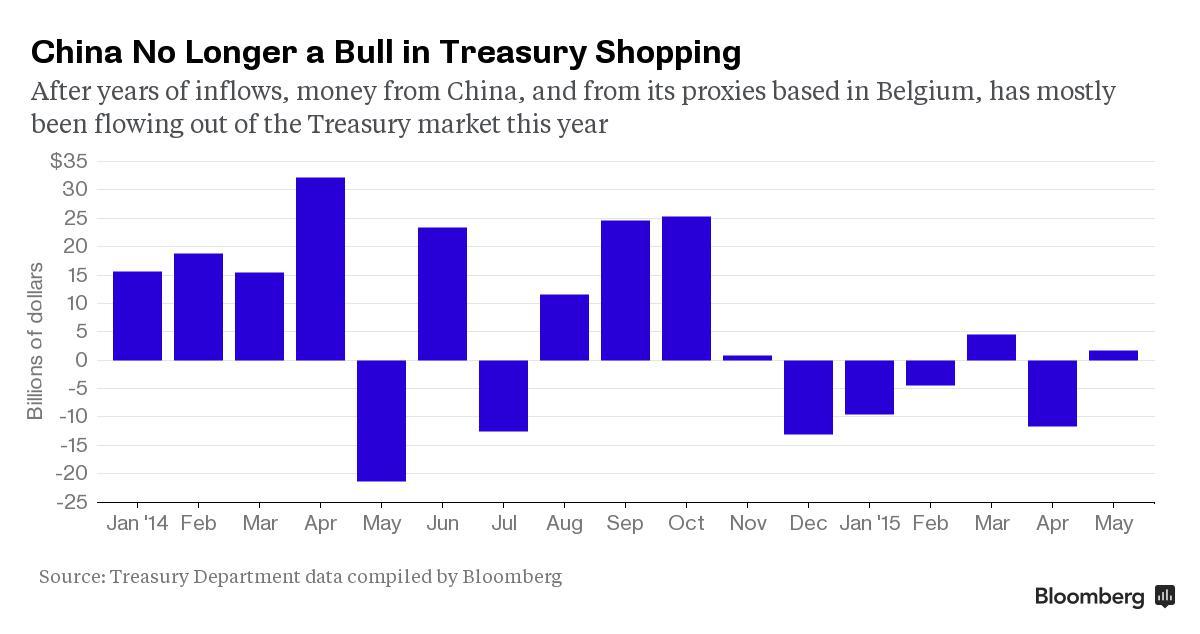 To get a sense of how robust demand is for U.S. Treasuries, consider that China has reduced its holdings by about $180 billion and the market barely reacted.

To get a sense of how robust demand is for U.S. Treasuries, consider that China has reduced its holdings by about $180 billion and the market barely reacted.

Benchmark 10-year yields fell 0.6 percentage point even though the largest foreign holder of U.S. debt pared its stake between March 2014 and May of this year, based on the most recent data available from the Treasury Department. That’s not the doomsday scenario portrayed by those who said the size of the holdings -- which peaked at $1.65 trillion in 2014 -- would leave the U.S. vulnerable to China’s whims.

Instead, other sources of demand are filling the void. Regulations designed to prevent another financial crisis have caused banks and similar firms to stockpile highly rated assets. Also, mutual funds have been scooping up government debt, flush with cash from savers who are wary of stocks and want an alternative to bank deposits that pay almost nothing. It all adds up to a market in fine fettle as the Federal Reserve moves closer to raising interest rates as soon as next month.

“China may be stepping away, but there is such a deep and broad buyer base for Treasuries, particularly when you have times of uncertainty,” Brandon Swensen, the co-head of U.S. fixed-income at RBC Global Asset Management, which oversees $35 billion, said from Minneapolis.

America has relied on foreign buyers as the Treasury market swelled to $12.7 trillion in order to finance stimulus that helped pull the economy out of recession and bail out the banking system. Overseas investors and official institutions hold $6.13 trillion of Treasuries, up from about $2 trillion in 2006, government data show.

China was a particularly voracious participant, boosting its holdings from less than $350 billion as its economy boomed and the nation bought dollars to keep the yuan from soaring.

Now, the Asian nation is stepping back as it raises money to support flagging growth and a crumbling stock market, and allows its currency to trade more freely. The latest update of Treasury data and estimates by strategists suggest that China controls $1.47 trillion of Treasuries. That includes about $200 billion held through Belgium, which Nomura Holdings Inc. says is home to Chinese custodial accounts.

Politicians in both the Republican and Democratic parties have raised concern that the amount of U.S. sovereign debt held by China creates an inherent risk.

A super-political action committee, the Americans for Prosperity Foundation, run by Republican billionaire David Koch, joined with the advocacy group Citizens Against Government Waste to fund television advertisements during the 2012 presidential campaign that portrayed China’s ownership of Treasuries as a threat to U.S. independence.

And in 2007, Democrat Hillary Clinton, then a Senator from New York, said in a letter to then Treasury Secretary Henry Paulson and then Fed Chairman Ben S. Bernanke that foreign ownership of U.S. debt was a “source of great vulnerability.” The economy “can too easily be held hostage to the economic decisions being made in Beijing, Shanghai and Tokyo,” she said.

The Treasury market overcame turbulence sparked by China in early 2009, just as the U.S. was ramping up borrowing and as the Fed was about to expand the supply of dollars as part of its stimulus efforts. At that time, then Chinese Premier Wen Jiabao said his country was “worried” about its investment in U.S. debt and wanted assurances the value of its holdings would be protected.

China’s pullback from U.S. securities is “far less ominous for the prospects for the Treasury market than some sensationalists might think,” said Ian Lyngen, a government bond strategist at CRT Capital Group LLC in Stamford, Connecticut. “It’s the macro and policy stories that give you the big overall level of rates, it’s not flows.”

U.S. commercial banks have increased their stakes in Treasuries and debt from federal agencies by almost $300 billion since March 2014 to over $2.1 trillion, Fed data show.

The category of buyers at Treasury auctions classified as indirect bidders, which include foreign investors and mutual funds, won a record 55 percent of the $1.2 trillion of notes and bonds sold this year, up from 43 percent in 2014.

Funds bought 42 percent of the debt, up from 35 percent last year, while overseas investors increased their allotment to 19 percent from 16 percent, the data show.

Slowing growth in China, where domestic debt is swelling and stock markets are becoming more volatile, is causing the kind of turmoil that fuels investor demand for safe assets such as Treasuries.

It may also slow the pace of inflation, according to William O’Donnell, head U.S. government bond strategist at RBS Securities Inc. in Stamford, Connecticut.

“Disinflation or deflation could become more embedded globally,” said O’Donnell, whose firm is one of the 22 primary dealers that trade with the Fed and are obligated to bid at Treasury auctions.

Slower inflation helps preserve the value of the fixed payments on bonds.

Yields that are higher than most of the developed world are another lure for investors. Treasury 10-year notes yield about 1.5 percentage points more than German bunds of similar maturity, and the spread reached 1.9 percentage points earlier this year, the most since 1989. As recently as 2012, there was no difference.

That depth of demand may stand the market in good stead as the Fed moves closer to raising interest rates.